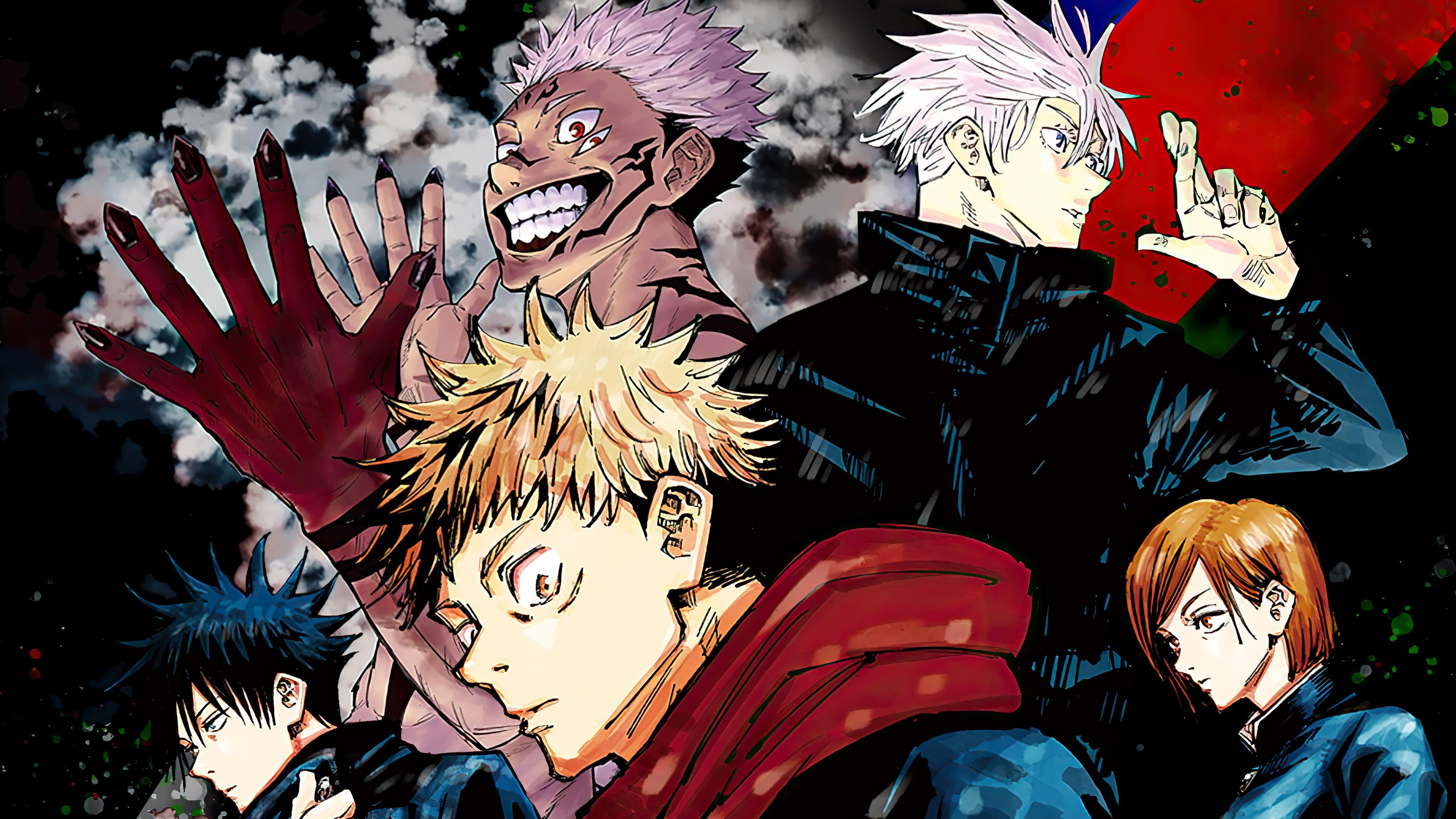 With so many fantastic contenders, shonen is a tough genre to compete in for popularity. Hundreds of other blockbuster action anime such as My Hero Academia and Attack on Titan (to name a few) are already sitting at the top of the food chain. As such, it is difficult for newcomers to enter the mainstream and hold onto the limelight, but that is exactly what Jujutsu Kaisen has accomplished. Premiering among many other shows in the fall 2020 anime season, it didn't take long for it to establish itself as the "next big thing."

As is common with the greatest hits, Jujutsu Kaisen comes with an ample cast of colorful and diverse characters, each amazing in their own way. But, obviously, not all of them are liked by fans equally, and the following list ranks them based on the general consensus of the fandom.

Updated on June 16th, 2021, by Taylor Walker. Fandom can be a finicky medium to gauge. As a series progresses new characters are introduced while others grow and change for better or worse, changing the tide of public opinion alongside each new evolution. Ergo, here's the current definitive standing for the most popular characters of the Jujutsu Kaisen anime series.

10. Kasumi Miwa Stands Out For Her Normalcy

Although Kasumi Miwa managed to beat out a lot of more prominent characters than herself, her place in the show's Top 10 is earned well enough. To fans of the supernatural horror that is Jujutsu Kaisen, any character who isn't outwardly jaded and/or traumatized is a breath of fresh air.

And, in Kasumi's case, the Kyoto second-year is downright normal. With her fairly well-regulated moral compass, down-to-earth demeanor, and giant crush on Satoru Gojo, it's as if any regular fan of the show were magically plunked right into the middle of it. Kasumi's a fan favorite because she represents the many, many fans who just want to play with swords and simp on one of the hottest guys in anime.

9. Sukuna Ryoumen Is Surprisingly Likeable (For A Demon)

Sukuna Ryomen is Jujutsu Kaisen's Big Bad, even if he does prefer to play a long game. And, with so many villains ready to take on the Jujutsu sorcerers, he's got plenty of time to lay in wait. Therefore, despite his title as the King of Curses, he hasn't done anything too heinous, making him, undoubtedly, the most likable villain on the show, so far.

Despite being a demon on a whole different power level, (other than the occasional demon murder spree and psychotic rant), he is a fairly easy-going person. Ironically enough, despite being a demon of such great caliber, he can't seem to successfully take over Yuji Itadori's body and is therefore bound to him, making for the ultimate odd couple.

8. Junpei Yoshino Is Popular Because Of The Lessons His Story Teaches

Junpei Yoshino's place on this list might come as a surprise for many. That being said, Jujutsu Kaisen is often praised for being unafraid to explore the darker themes of the Shonen genre. In his short time on the show, Junpei proved a few very poignant points that carry over into the overarching theme of the show— not all villains are evil, no hero can save everyone, and not everyone can be saved.

Even with a story as short and tragic as Junpei's, it's one that resonates with many. Pushed to the brink by senseless harassment fron his peers and neglect from authority figures, Junpei finds himself an easy target for Cursed Spirit Mahito's manipulations. Although he finds genuine companionship in Yuji Itadori, he ends up serving as a harsh reminder of the unfairness of reality. A sobering lesson indeed, but it's no wonder the wayward boy touched the hearts of so many.

7. Aoi Toudou Finds It Hard To Connect — But When He Does, He's All-In

Aoi Toudou is one of those divisive personalities; either you love him or hate him, there's no in-between. And he feels the exact same about everyone he meets. Although Aoi's moods are mercurial (at best) and violent (most of the time), when he finds a kindred spirit, he loves with all that he has.

This particular personality quirk has spawned a bromance for the ages, with Aoi deciding that he and Yuji Itadori are bonded brothers, thanks to their similar taste in women. Despite Yuji's understandable reticence (after all, Aoi did pulverize Yuji's actual closest friend), he's earned Aoi's full support in his training to be a powerful Jujutsu sorcerer and, if Aoi gets his way, in life.

6. Nobara Kugisaki Is The Balanced Middle Ground Of The Main Trio

Nobara Kugisaki makes up the female component of the main trio. Not as goofy as Itadori or as serious as Fushiguro, she represents a middle ground of her own. Although not outwardly the strongest in her class, she continues to prove her strength as a talented Jujutsu sorcerer.

It also isn't too much of an exaggeration to say that her weapons of choice— nails, a hammer, and a voodoo doll— are probably among the most unique and eerie in anime. Her fiery spirit and boundless energy keep everyone on their toes, friend or foe, earning her an effortless spot among the show's most popular characters.

5. Kento Nanami Sees Demon Hunting Is A 9-5 Job & Nothing More

Kento Nanami is one of the strongest sorcerers in the anime, on par with Gojo. He quit being a sorcerer at one point and started working as a normal salaryman as he didn't like being a sorcerer. He later returned to the fold, simply because "work is sh*t."

A man of extreme professionalism and maturity, he is the polar opposite of Gojo and carries an air of respect for himself. He treats his position as a jujutsu sorcerer as just another job and even refuses to fight demons past usual office hours, hating overtime just as much as anybody.

4. Toge Inumaki Has A Cursed Tongue (Except When It Comes To Food)

Jujutsu Kaisen is filled with characters each more peculiar than the other and Toge Inumaki is no different. Sorcerers in the Jujutsu Kaisen universe all use cursed technique's in one way or another, and for Inumaki it is through his mouth. Due to his ability "Cursed Speech," signified by the marks on his tongue and both cheeks, he cannot speak normally as his words are quite literally cursed.

Instead, Toge speaks with a limited vocabulary of words that are safe to use, and strangely enough, these safewords are made up of rice ball ingredients, such as "Salmon" and "Kelp."

3. Satoru Gojo Is So OP That Only Plot Armor Saves The Other Characters

Just like in the series, Satoru Gojo's reputation speaks for itself, easily placing him among the most beloved Jujutsu Kaisen characters. Gojo is a sensei-type character, but at times can be the most childish of them all.

However, his irreverent nature never overshadows his status as the show's most powerful sorcerer, as he shows time and time again in impressive feats against high-level Curses. In fact, he's proven so powerful that he's often written out of episodes to give the greener protagonists a chance to shine; a fact that has no doubt reflected in his slight drop from previously higher spots.

2. Megumi Fushiguro Is A Mysterious Character But Has Great Banter With Yuji

Both Gojo and Itadori together make an extremely hilarious comedic duo, perhaps a little bit too much. Megumi Fushiguro's more subdued and austere nature serves to keep their team grounded, even if he does end up the butt of many of their jokes. Hailing from a revered sorcerer family, Megumi is powerful in his own right, with clear potential that's even managed to catch the eye of Sukuna himself.

Megumi's mysterious background makes him intriguing to fans, while the banter-fueled dynamic he and Yuji bring to the show makes them ceaselessly entertaining to watch.

Yuji Itadori as a protagonist is not the most solidly written character but, through him, the anime explores new and intriguing avenues within the Shonen genre. In a rather grim setting rife with murder and horrifying demons, he provides some much-needed comic relief. One of Yuji's most likable characteristics is his nearly unflappable nature, a feature that is fairly unique among the genre.

Where many in Yuji's place might agonize over the many tragedies he regularly faces, Yuji's pragmatic personality ensures that the show's signature quick pace keeps moving, something fans of the show enjoy. Another of Yuji's draws is the prospect of exploring his immense latent power. While he's far from the most powerful character on the show right now, with ticking timebomb, Sukuna, living within him, Yuji's in for a massive power boost that has fans itching to find out what happens next.

Like Darling in the FranXX? Watch These Summer 2020 Anime!!