Attack On Titan: 10 Things You Need To Know About The Female Titan - Annie Leonhart

Annie inheriting the Female Titan in Attack on Titan and the events that followed are some of the series' most complex and tragic arcs. 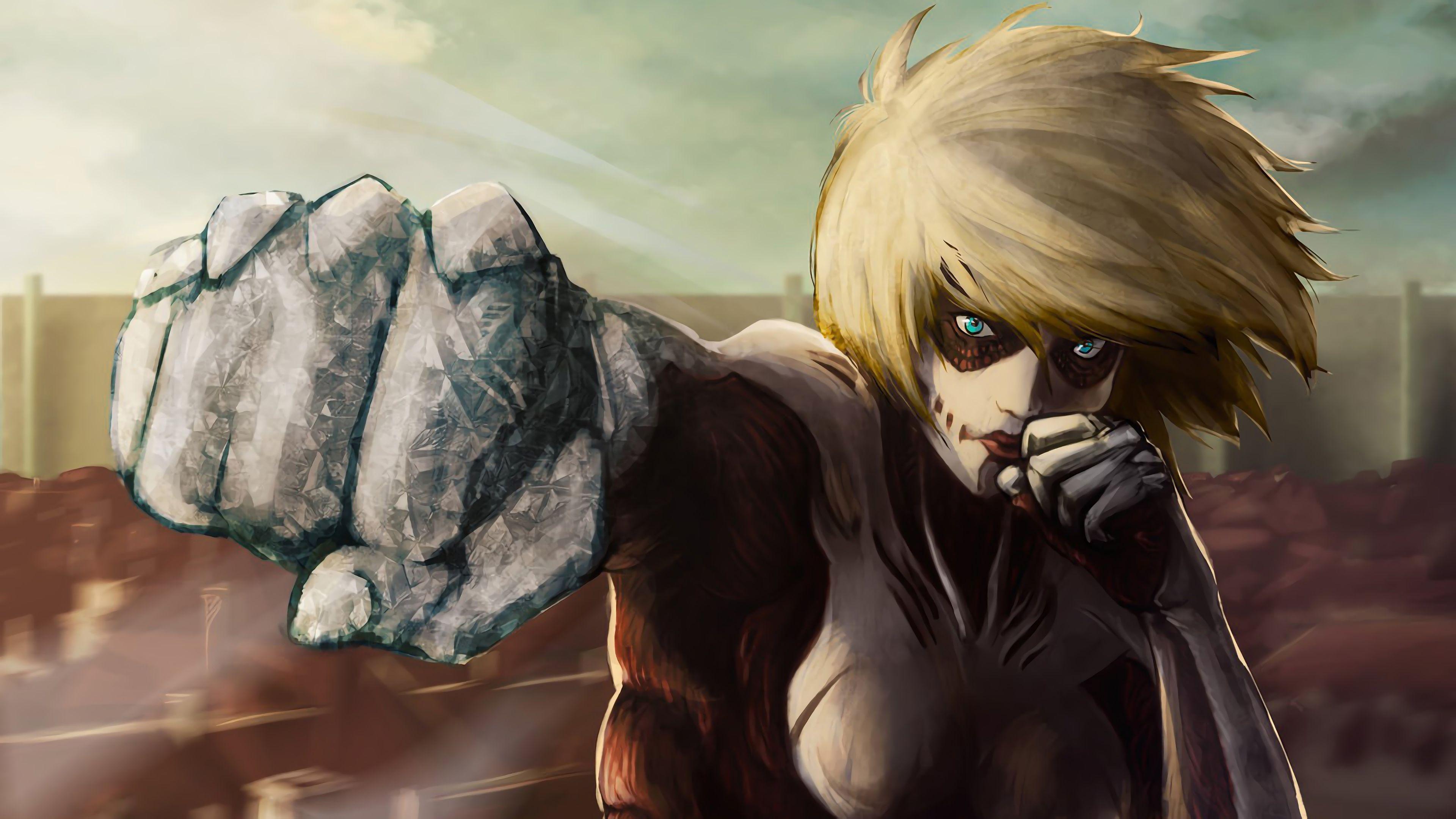 The Female Titan has played a big role in the Attack On Titan manga. When she first appeared, she immediately became the main antagonist at the time. However, after she used her hardening ability to keep herself in a crystal, the story focused on more conscious characters. Now that she has returned, she has become very important in the story and readers cannot wait to see what happens to her. 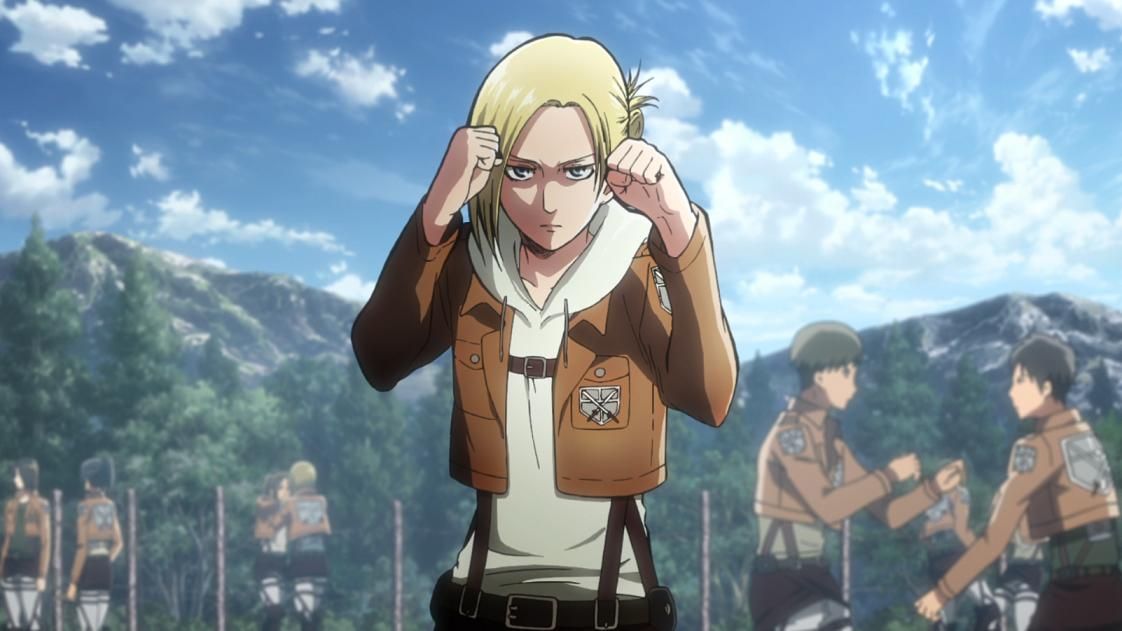 Many things have happened to Annie, the only known inheritor of the Female Titan, throughout the series and fans may not remember everything. There are some things that they will need to know before the series ends.

10. She Was Experimented On

In one of the most recent chapters of the manga, Falco causes Annie to recall her early days as the Female Titan. During this time, she was experimented on due to her power to gain abilities of the other Nine Titans. Marley wanted to see what she would be able to do and what she couldn't, which explained why she had powers that her comrades also had.

9. She Can Scream To Summon Other Titans To Fight For Her

One of the Female Titan's most useful powers in the ability to summon other titans and make them fight her opponents. She used this ability when she attacked Shiganshina. While Bertholdt and Reiner used their titans to break into Paradis, she was the one that actually brought the titans into the walls. She also did this after the Survey Corps trapped her and was able to escape in the chaos.

8. Annie Was Chosen To Inherit Her Because Of Annie's Martial Arts Abilities

Due to Annie's experience in martial arts, Marley decided that she would be a good user of the Female Titan. At the same time, Marcel, Bertholdt, and Reiner were chosen to be the Jaw Titan, Colossal Titan, and Armored Titan, respectively.

After proving that they had what it takes to destroy an entire nation, Marley sent their Warriors to Paradis and hoped that they'd be able to inherit the Founding Titan, making Marley the most powerful country in the world. However, their plan would not become a reality.

7. Annie Was Trained To Be A Titan By Her Father For His Own Selfish Ends

Annie and her father have had a very interesting relationship. He adopted her after she ended up at the internment zone and hoped that he could train her into becoming a titan so that he could be an honorary Marleyan. He was the one that taught her how to fight.

However, after she did what he wanted and became a Warrior, he regretted how he treated her and realized that he wasn't a good father. Her return from Paradis became the most important thing to him, despite making her so strong that she used her fighting skills to significantly injure his legs.

6. Annie Considered Going Back To Marley To Reunite With Her Father

In between arriving at Paradis and getting to Wall Maria, Marcel was eating by Ymir, taking the power of the Jaw Titan. Annie, Reiner, and Bertholdt ran away and argued over what to do. While Reiner wanted to continue their mission and was willing to do anything for them to join him, Annie wanted to return to Marley, hoping to reunite with her father as that became her goal.

In the end, Reiner was able to convince his comrades to attack Paradis and search for the Founding Titan. As a result, Annie has not seen her father since.

5. Annie Was Forced To Kill Soldiers That She Had Befriended

Though she may seem cold and uncaring, Annie actually did see the members of the 104th Cadet Corps as her friends. After the Warriors went to Paradis, they joined the military and met the people they'd be spending the next few years with. In that time, Annie tried to present herself as a loner so that she wouldn't become attached to her victims.

Throughout the series, she had to battle several of them. In one instance, Reiner had forced her to help him leave Marco to be eaten by a titan. She was devastated that she had to kill her comrade but did as the Armored Titan demanded anyway.

4. Annie Joined The Military Police In Their Search To Find The Founding Titan

When they found out that Eren was the Attack Titan, the three Warriors changed their plan. Not knowing that he was also the Founding Titan, Reiner and Bertholdt joined the Survey Corps to keep an eye on him while Annie joined the Military Police Brigade to find the Founding Titan.

Though she didn't know them for long, fans saw her interactions with Marlowe and Hitch. She had to escape from her new allies, as well as the rest of the Military Police, when she attacked the Survey Corps as the Female Titan.

3. The Female Titan's Hardening Ability Is A Great Defensive Move But Left Annie Frozen For Years After

Like her scream, Annie's use of hardening helped her out a lot. After losing her fight against Eren and Mikasa, Annie remembered her promise to return to her father. She had to choose between dying or being trapped inside of a crystal. She chose to use her hardening powers to save her life but wasn't able to move a muscle for years.

Hitch ended up watching her after finding out that her roommate was the Female Titan. Armin also visited her until she was finally released.

2. After Breaking Free, Annie Was Once Again Fighting Alongside Her Cadet Corps Friends

After Eren unhardened everything, the Eldians and Marleyans paid so much attention to the walls turning back into the Colossal Titans they once were that the majority of them didn't even think of Annie's freedom. When Armin mentioned this, he was shocked to find her behind him.

She decided to join him and the other few people in Paradis that decided to convince Eren to stop the Rumbling. She no longer had to manipulate the allies that she made in the 104th Cadet Corps as they were now fighting for the same thing as the Warrior Unit.

1. Annie Finally Has Enough Of Fighting

After believing that Eren killed her father, Annie decided to not help her comrades stop him. She gave up all hope in the one goal that she had and never wanted to fight any of them, including Eren. She decided to depart from the Survey Corps and most of the Warrior Unit.

However, she did join Falco, Gabi, and Kiyomi. This was when Falco reminded her of the experiments she went through and revealed that he found out about a former inheritor of the Beast Titan that was able to fly. Thinking that he could do the same, readers are excited to see what happens to them as the series comes to an end.